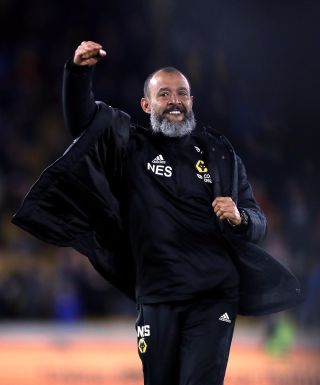 They will smash that record again in the summer when Raul Jimenez’s loan from Benfica turns into a £32million permanent deal.

Saturday’s visitors Fulham shelled out around £100million after their promotion via the Sky Bet Championship play-offs last year but have been relegated immediately.

And, after guiding last season’s second-tier champions to seventh in the Premier League, Nuno feels character rather than cash is more important.

He said: “I never saw a £20 note running on the pitch. It doesn’t have to do with money.

“The more important aspect is what you have before, the squad and the spirit you have and ethic of work.

“Someone who comes then finds a routine and philosophy and just has to get along.

“This is the best way. It is about the way we work and the way the players commit themselves.

“Since day one everyone here has competed for the whole process of the team and I still believe we can improve.

“It is an idea, we work this way and it is our model of our squad and training. We made our decisions.

“Other teams can do what they decide is better for them. We have a small squad but everybody has contributed a lot.

“The idea is always to improve the player. I think we are doing well, not all the players that come have to have immediate success or reach their highest point.

“A lot of us will become better with time and trust and confidence to improve.”

Wolves, who could yet qualify for Europe, are expected to spend again in the summer but Nuno remained coy on their plans.

He added: “The moment will come to make decisions but today is not the moment. We don’t want to speak or think about it. We still have two games to go, first of all tomorrow. Let’s focus on tomorrow.

“All these things we will have time to think about them.”