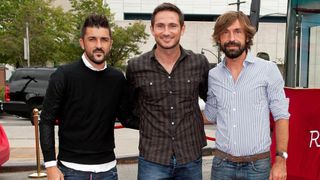 Lampard, captain Villa and Pirlo all took to the field at Gillette Stadium, helping New York City extend their winning streak to four matches, with the Eastern Conference leaders now four points clear atop the standings.

And speaking afterwards, Vieira heaped praise on his star trio.

"Fantastic. We are doing well, of course, because of those three players, four players that you mentioned, and a really good period," the Frenchman said.

"They are playing really good. They are dictating the tempo of our game and I think the way we want to play suits them really well and, of course, you need element players to perform.

"When you look at our goalkeeper Josh [Saunders], the way he performed today, outside back… We look solid in every position and I think if you come here, you need your 11 players to perform and tonight everyone was on the field to perform and perform well for the team."

In an entertaining match away from home, Lampard broke the deadlock in the 58th minute, after Villa hit the crossbar in the first half.

Thomas McNamara's cross cannoned into Lampard's thigh and the 38-year-old guided the ball into the back of the net.

"We showed personality and the way we tried to play was really positive," Vieira added.