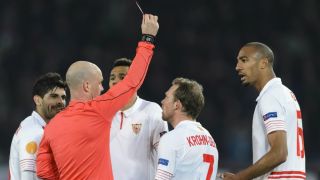 Sevilla midfielder Steven N'Zonzi said he cannot understand why he was sent off for the defending champions in their 0-0 draw against Basel in the first leg of the Europa League last-16 tie.

N'Zonzi was shown a yellow card for a foul on Renato Steffen in the 75th minute before receiving his marching orders three minutes from time on Thursday.

Referee Anthony Taylor gave N'Zonzi a second yellow for an apparent elbow on Birkir Bjarnason, but the Frenchman claimed he was unfairly punished due to his height.

"I went to protect the ball, but I am tall and he is shorter," he said after the game.

"The referee needs to understand that I am taller than all the players, and the opponents are clever and try to simulate these types of situations.

"A red card is incredible. It's not the first time [it's happened].

"In the Premier League, and the referees are English, these fouls are not given."

Sevilla coach Unai Emery was confused with the decision as the club aim to secure back-to-back Europa League titles.

"I have not seen anything in the situation with Steven, I don't think there were any bad intentions," Emery said.

"When a player is that tall it's complicated, and the same thing happened the week before.

"He does not know how to give an explanation because these type of circumstances limit his style of play."