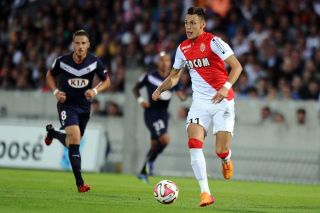 Having finished runners-up to Paris Saint-Germain last season, much was expected of Monaco this term, despite the departure of James Rodriguez to Real Madrid.

Jardim was the man chosen to replace Claudio Ranieri at the helm in the close-season, but the former Sporting Lisbon boss has endured a tough start to life at the Stade Louis II.

Monaco have lost both their Ligue 1 fixtures so far this season, including a 4-1 defeat at Bordeaux last time out.

However, Ocampos has no doubt that Jardim's methods will soon begin to bear fruit.

"The coach brings a new philosophy," the 20-year-old midfielder told the club's official website. "For now, we have not been able to demonstrate it.

"But I am convinced that in the coming matches we will react and reap the fruits of our labour. I think the coach brings a lot of confidence to the players, this is very positive.

"This year we would like to win a title, the most important is the championship."

Monaco return to the UEFA Champions League this season after a nine-year absence, and Ocampos cannot wait to get started.

"It's a dream to play in the Champions League this season," he added. "After the World Cup, this is the best competition."