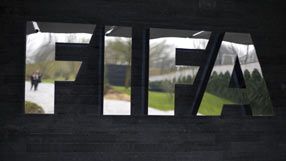 Temarii was suspended, along with Amos Adamu of Nigeria, following an investigation by Britain's Sunday Times newspaper which alleged they were prepared to sell their votes for cash.

OFC acting head David Chung of Papua New Guinea flew to Zurich expecting to take Temarii's place on the FIFA executive committee but he is now not allowed to vote.

"FIFA has outlined that Oceania's sole spot on the FIFA Executive Committee is not considered vacant as long as the appeal process is still open," the OFC said in a statement.

"Therefore, Acting OFC President David Chung will not be able to replace Mr. Temarii on the FIFA Executive until such time as the appeal process has concluded," it added.

The hosting decision will now be made by 22 members of the executive committee following Temarii and Amadu's suspensions.

England, Russia, and joint bids from Spain/Portugal and Netherlands/Belgium are contesting the 2018 finals, while the United States, Qatar, Japan, South Korea and Australia are bidding to stage the 2022 tournament.

Temarii had said on Tuesday he would not resign from FIFA's executive committee despite being suspended.

In a statement issued through his lawyer in Paris, Temarii said: "On November 18, 2010, the FIFA Ethics Committee cleared me of all corruption charges but decided my suspension for one year beginning on October 20, 2010, for charges whose nature and grounds I still do not know.

"Since then, I am waiting for a reasoned decision in order to exercise my right to appeal.

"Despite pressures and issues at stake for the OFC, I decided not to waive this fundamental right to restore my honour, dignity and integrity following the calumnious accusations I suffered from the Sunday Times."