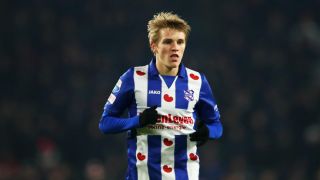 Martin Odegaard does not expect an early return to Real Madrid irrespective of his disappointing start to life at Heerenveen.

The Norway international joined Heerenveen on an 18-month loan deal in January, but has been struggling to live up to the high expectations at the Abe Lenstra Stadion.

Odegaard has yet to find the net for Heerenveen after 13 Eredivisie appearances and has lost his starting berth in recent weeks.

Madrid have an option to recall the 18-year-old ahead of next season, but the attacking midfielder expects to remain at Heerenveen for the 2017-18 campaign.

"The plan is for me to still play for Heerenveen next season," Odegaard told Omrop Fryslan.

"My contract here is until the end of next season, although there is an option to return to Real Madrid early.

"But it looks like I will be at Heerenveen next season.

"It is never easy when you arrive at a new club, I did not expect it to be easy."