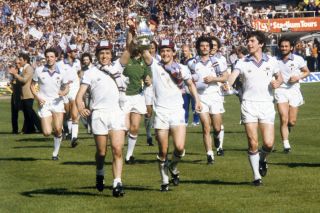 On this day in 1980, second division West Ham stunned Arsenal to win the FA Cup at Wembley.

Trevor Brooking’s early goal saw the Hammers lift the trophy for the third and last time, with that 1-0 triumph also the last time a team outside the top division has won the final.

Alongside the experienced players like Brooking, Billy Bonds and Frank Lampard in the West Ham starting line-up that day was teenager Paul Allen, who became the youngest man to play in an FA Cup final at Wembley aged 17 years and 256 days.

“Because of my age, the national newspapers had been building me up in the days running up to the final but I hadn’t been picked for our last home league match of the season against Charlton Athletic and I hadn’t known how to take that,” Allen said.

“Then on the Friday lunchtime after training, John (Lyall) announced his starting XI for the following afternoon and, upon hearing my name, I selfishly switched off. I was so happy!

“Returning home, my dad – Ron – asked me for tomorrow’s starting line-up but upon getting to myself at number seven, I couldn’t tell him the last four names because I simply hadn’t heard them.”

Allen remains eternally grateful to the senior professionals that looked after him as he came through the ranks and an experience that he may have capped with an FA Cup final goal was it not for a cynical Willie Young challenge.

“With their ‘keeper Pat Jennings just coming into sight, my brain was processing what to do, when I got scythed from behind,” he told the West Ham website.

“Even today, 40 years on, it’s still a big talking point for many people but, in reality, it didn’t affect the outcome of an amazing, emotional day.

“We won 1-0, I’ve got my winners’ medal and I’m thrilled that I’m part of Hammers history – I certainly don’t wake up every morning thinking about that tackle!”

Allen went on to play in further FA Cup finals as a Tottenham player, losing to Coventry in 1987 before beating Nottingham Forest in 1991.