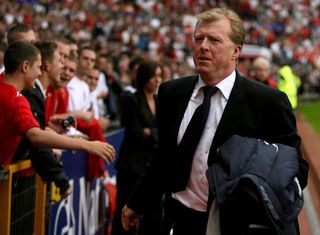 England had heavily courted Luiz Felipe “Big Phil” Scolari to succeed Sven-Goran Eriksson after the 2006 World Cup, only to be rebuffed by the former Brazil boss.

Scolari did not want the media intrusion, but former Middlesbrough manager Steve McClaren had no such concerns, and duly assumed the reins, just in time to oversee the clash with Greece at Old Trafford on August 16, 2006.

McClaren’s stint would end up the second-shortest of any England boss behind Sam Allardyce and finish with him staring forlornly into the Wembley drizzle under an umbrella in a 3-2 defeat by Croatia in November 2017.

But at the beginning there was only optimism for another new England dawn, as McClaren’s men brushed past Greece 4-0 without issue.

John Terry toasted his captaincy debut by nodding in the opener, latching onto Stewart Downing’s header into the box.

Frank Lampard profited from a deflected shot for the second, before Peter Crouch turned home from short range.

Rangy striker Crouch then headed home the fourth to wrap up a facile England win, but could not complete a hat-trick despite several more promising chances.

Steven Gerrard featured on the right flank as McClaren looked to steer England beyond the David Beckham-era, a move he would later reverse.

McClaren had promised his England would play without fear, and while he was able to deliver that under precious little duress against the limited Greeks, there was to be no long-term realisation of that vow.

McClaren’s tenure was to last just 18 games and 16 months, after which he was eventually replaced by Italian Fabio Capello.