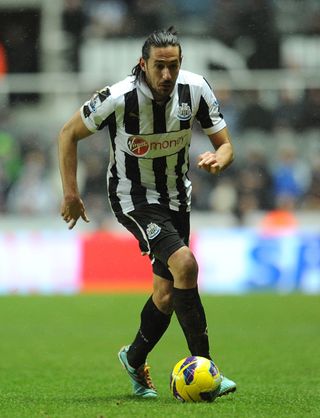 Jonas Gutierrez admitted he “went home in tears” upon discovering he had been diagnosed with cancer, with the then Newcastle winger inundated with messages of support after revealing the news on this day six years ago.

Gutierrez was a firm fans’ favourite after staying on Tyneside despite Newcastle’s relegation to the Championship in 2009, helping them immediately bounce back to the Premier League the following season.

He was integral in their fifth-place finish in 2012 but the following year, for reasons that were at the time unknown to the public, Gutierrez returned to his native Argentina for surgery after his cancer discovery.

Heard the terrible news about @elgalgojonas Wish him a speedy recovery. Great guy with a great family. My thoughts are with them all x— Joey Barton (@Joey7Barton) September 17, 2014

After returning to the north-east, he found opportunities limited so spent the second half of the 2013-14 campaign at Norwich, reuniting with former Newcastle boss Chris Hughton.

In the summer of 2014, Gutierrez revealed his struggles of the preceding few months in an interview with Argentinian TV show Indirecto on TyC Sports.

He said: “When I was told I had cancer, I went home in tears. I came here and I assumed the costs despite having a contract with Newcastle. Money is not important. What is important is my health. I had to start chemotherapy.

“This is the most difficult match I’ve ever played. You start thinking about important things when you have problems like this one.

“I decided to reveal all this because I think this is a difficult moment, but there is nothing wrong with this. These things may help other people.”

Ex-Newcastle team-mates Joey Barton, Peter Lovenkrands and Steve Harper all tweeted their support while in honour of Gutierrez, applause broke out at several Magpies games in the 18th minute – the player’s shirt number.

He made his first Newcastle appearance in 17 months as a substitute in the 1-0 defeat to Manchester United in March 2015, receiving a thunderous reception at St James’ Park as he accepted the captain’s armband from Coloccini.

A couple of months later, Gutierrez fittingly scored the goal in a 2-0 win against West Ham which guaranteed Newcastle’s top-flight survival although it would prove to be his last appearance in a black and white shirt as he was released over the summer.