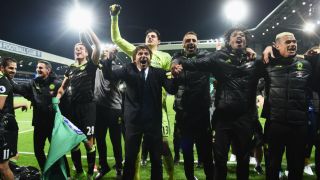 Gary Cahill lauded Chelsea's Premier League title triumph as the best way to silence the critics following a disappointing defence of their crown the previous season.

The Blues finished 10th in 2015-16, having lifted the trophy under Jose Mourinho 12 months previously, but the arrival of Antonio Conte at Stamford Bridge heralded a revival.

Friday's 1-0 win at West Brom - sealed with an 82nd-minute winner from substitute Michy Batshuayi - secured the club's fifth Premier League crown - one that was richly deserved, according to Cahill.

"There's opportunities you get that you want to grasp with both hands and you have to cherish them," he told Sky Sports.

"We've been the best team in the league. We deserve it. We've worked hard. There's no better feeling. We have to cherish this.

"People write you off at the start of the season. This is the only way to shut people up. You let other people do the talking for you.

"This is a special group of players. To show the character after last season, and for Michy to come on and get the goal and ultimately win us the title. We are champions. It's another one in the cabinet."

For club captain John Terry, it is a fifth Premier League crown, although his role this season has been a marginal one.

"It's been a delight to sit and watch it from a different perspective. I'm delighted for the lads, especially after last season," he said.

"We will lift it [the trophy] together. Me and Lamps [Frank Lampard] and Didier [Drogba] have done that for many years. Gaz has been on the field week-in, week-out so he should be the one allowing me to do it."