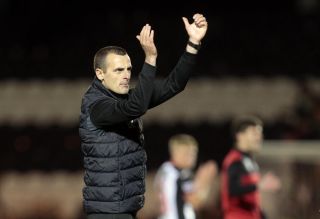 David Turnbull’s 74th-minute strike seemed to have secured the home side the victory only for substitute Magennis to snatch an equaliser in the final minute.

The goal leaves St Mirren in 11th place in the Ladbrokes Premiership, four points behind Hamilton with two matches remaining and destined for the relegation play-offs.

But Kearney said he would have accepted that when he took over as manager in the autumn.

He said: “I rewind back to September and if you’d said with two games to go you’d at least have secured a play-off position I’d have taken your arm off.

“But the players have to be greedy and, while we now need some type of favour on the last day of the season, we still have to win next Monday night.

“If we beat Hamilton and Dundee then Hamilton must win on the last day. If we hadn’t scored today a draw would have done it for Hamilton so that goal could have a slight impact.”

Kearney felt that St Mirren should have had a first-half penalty when Tom Aldred fouled Danny Mullen, and that defender Gary MacKenzie had been impeded before Turnbull’s goal.

He added: “There was stonewall penalty on Mullen. The ref was standing close to it. Even their goal I feel there was a foul on Gary MacKenzie by the young striker (James Scott).

“There’s a pull of the shirt and he leans over him. It looks a foul, too.

“These are the decisions that need to go for you. I don’t think the defender saw Danny coming. Probably on days like that when it’s 0-0 those are pivotal moments.”

Motherwell manager Stephen Robinson was frustrated at his side’s inability to see out the match.

He said: “We totally dominated the whole game. We got more in behind them in the second half. We should be clever to see the game out.

“We had a four-versus-two situation with 30 seconds left, made a poor decision then didn’t defend a long throw.

“It’s frustrating. Some of the younger players’ decisions weren’t as great as they could have been but you live and learn with those decisions.

“But we played some really good stuff. There was a lot of patience and we coped with all they threw at us.”