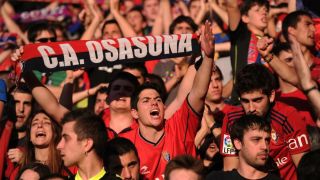 Kenan Kodro was Osasuna's hero as he secured a 1-0 win over Girona to rubber-stamp promotion to La Liga through the Segunda Division play-offs.

Kodro and Maikel Mesa had secured a 2-1 win in the first leg in Pamplona, before Osasuna finished the job on Saturday at Estadi Municipal de Montilivi.

Promotion to Spain's top division is Osasuna's seventh, and they have historically had a habit of bloodying the noses of La Liga's big boys.

In their 2013-14 relegation season, Barcelona and Real Madrid left El Sadar with just a point while eventual champions Atletico Madrid were sent packing with a 3-0 defeat.