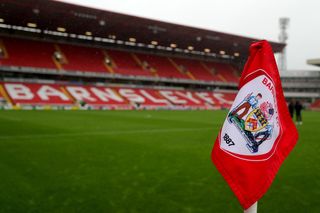 Ostersunds manager Ian Burchnall has called Barnsley a “massive football club” but has not spoken to them about becoming their new boss.

The English coach, who took over from Graham Potter at the Allsvenskan outfit, has been linked with the Oakwell position following Daniel Stendel’s exit earlier this month.

The 36-year-old has ambitions to return to work in his homeland but is focused on helping keep financially-stricken Ostersunds away from relegation going into the final two games of the season.

“I haven’t had any conversations about the Barnsley job to be honest,” Burchnall told the PA news agency.

“I’ve got two huge games coming up in the next week or so and all my thoughts have been focused on them.

”I’m flattered to be linked. Obviously Barnsley are a massive football club, known for playing good, attractive football and they’re in the Championship.

“I think it’s a fantastic job and of course one day in the future to be working in the UK would be great.

“Right now I am enjoying building a project in Ostersund.”

The Reds fired Stendel less than four months after he led them to promotion from League One.

They are currently bottom of the Championship and without a win in 12 games, but have drawn with West Brom and Swansea in their last two outings under caretaker manager Adam Murray.

Murray said on Thursday that he did not know how long he would stay in the position for but is prepared to do it for as long as he is needed.

Burchnall has battled difficult circumstances in Sweden as Ostersunds’ owner is absent while he fights a legal battle surrounding the club’s finances.