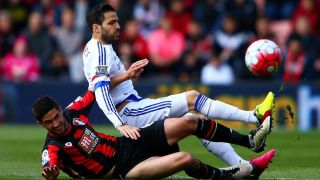 Chelsea manager Guus Hiddink feels Cesc Fabregas is at his best when he does not have to worry about his defensive duties and can solely focus on creating chances for his team-mates.

The Spain midfielder put in a superb performance in the 4-1 win over AFC Bournemouth at the weekend, setting up three goals to take his all-time assist tally in the Premier League to 95.

Hiddink was impressed with Fabregas' performance at the Vitality Stadium and believes it is key to the former Arsenal captain's success that his team-mates look after his defensive work.

"It was a perfect performance from Cesc," Hiddink said.

"It is important that he is surrounded by players who can help him out in his defensive work so he can focus on creating things.

"He has that at Chelsea now and when he is in a more advanced position, he doesn't have to do that much defensive work and can concentrate a bit more on his speciality."

Ryan Giggs made 162 assists during his 22 seasons in the Premier League with Manchester United, while Chelsea legend Frank Lampard holds second place with 102.