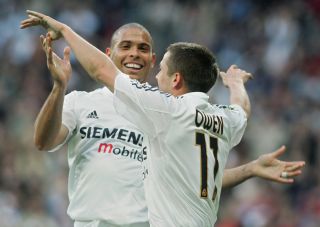 The Welsh winger has been the subject of a summer-long transfer saga involving the La Liga giants, who are believed to be closing in on the Spurs star for a world record fee in the region of £90 million.

Owen spent the 2004/05 campaign at Santiago Bernabeu after leaving Liverpool for £8 million, netting 13 goals in 35 La Liga outings, including one against Barcelona.

The striker-turned-commentator with BT Sport is confident Bale would have no trouble adjusting to new surroundings on the pitch, but he advised the 24-year-old to prepare well for life off it and settle down as quickly as possible.

Speaking exclusively to FourFourTwo, Owen said: "From a football point of view it won’t be a huge difference. Football nowadays is a worldwide sport. Back when I started, if you were playing in a European game it was almost like you were playing a different sport.

"Now there are so many foreign players in every league it’s all merged into one, so I don’t think he’ll struggle from a football point of view.

"If I was to give him one bit of advice it would be off the pitch: prepare well for it. Get his agent or his people who need to be around him to find a house as soon as possible and settle in. I know he’s got one child, exactly the same as me when I went, and I don’t think I had the ideal preparation. My family found it difficult to settle in. You’re occupied playing football so for them it’s even more difficult."

Owen's Spanish experience only lasted a year before he returned home to play for Newcastle United, Manchester United and Stoke City. Nevertheless, the 33-year-old still feels Bale should jump at the chance to join the nine-time European Cup winners if the chance presents itself.

"I would definitely go for it. I think it’s a magical club," he said. "To say you’ve played for Real Madrid with all the greats that have played for them… if he’s got the opportunity I wouldn’t blame him for wanting to take it.”