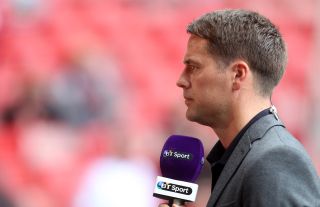 For several years now the London metropolitan centre of Stratford City has been undergoing a process of complete renovation. For the moment this corner of East London is a curious one, midway into a development project that will last until 2020: parts of it, like the Olympic Village and Queen Elizabeth Olympic Park, are richly evocative, conjuring unforgettable memories of a time when this was the nerve centre of the sporting universe. Other parts of it however are entirely forgettable: vast open swathes of nothingness and wide roads that lead to nowhere in particular.

It's here that Michael Owen will take the first steps in reconstructing his own career as he begins his new life as a pundit this season.

Although Owen is only 33, his retirement in May came as no surprise. In fact, as FourFourTwo sits down to chat with England’s fourth highest all-time goalscorer it becomes clear he’d long been planning for life after football.

“I’ve been up to a lot since retiring,” says Owen, looking relaxed in a corner of the green room at BT Sport’s high-tech Olympic Park studios, a panel of HD screens broadcasting European football in the background behind him.

“Signing with BT has taken up a lot of my time which is great. The other thing I’ve set up is a management company to look after younger players, so they’re the two things that take up the majority of my time. It was always important for me during my career – certainly towards the end of my career – that I put things in place to keep myself busy when I retired.

"Thankfully those plans and that work has fallen into place. I wake up every morning and feel as though I’ve got a purpose and things to do, and I’m not thinking about playing football any more. I’m in a different way of thinking already, so I’ve taken to retirement pretty well I think.”

Owen’s career trajectory doesn't need repeating, but it seemed sad to see a journey encompassing Liverpool, Real Madrid, Newcastle and Manchester United end on the Stoke bench, an afterthought in English football’s wider conscience after 16 years in the game. It didn't befit a player who had promised even more than 40 goals in 89 England caps, 163 league goals, six major trophies and a European Footballer of the Year award.

Kevin Keegan once described Owen as someone who could play into his late thirties, but, by the end, had England’s one-time boy wonder simply fallen out of love with football?

“It’s strange,” Owen responds. “Not with football I don’t think, because even now I’m playing five-a-side with my mates. I love football - love talking about it and watching it, but I don’t know what it is on the playing side…

“When you don’t feel as if you’re going to play on the Saturday and so you’re training for nothing, only to keep fit, there’s no end goal and there’s no purpose – especially with what I’ve had in my career with the highs. To feel as if you’re not going to feature makes it quite hard to motivate yourself."

After all the glory and goals, did it become hard to go to work?

“The day-to-day training was becoming a grind. I liked going into training for the laugh with the lads and I liked matchdays because there was a buzz about it, but going in every day to practice when it was windy, rainy or freezing was starting to become a grind.

"It's strange, because now I’ve retired all my mates will phone up and say ‘There’s a five-a-side game on Thursday night, are you coming?’ and I’ll be the first person down there! I’m excited to play football.

"When you’re getting told what to do and you’re standing around for an hour and a half, that started to grind so I don’t suppose I’ll miss that.”

This feeling was exacerbated by Owen’s time at Stoke, where he made just nine appearances and only one start in a disappointing final season as a professional.

"I’m 33; you can hang on in there for another year, two years, three years, but as I mentioned, having had the career that I’ve had, it’s not easy for me to play at a level knowing I can’t do the things that I used to do.

“I’m not as fast as I used to be. My mind’s telling me to do something and I can’t quite do it anymore so I just felt it was the right time to quit while I still felt proud about my career. I didn’t want to start going lower and lower.”

While playing professionally may no longer appeal to Owen, it’s clear during the conversation that he has by no means fallen out of love with the sport completely. The attraction remains, in different guises: hence the desire to get into punditry.

But how does a player not exactly renowned for controversy – this is a man who once tweeted he was going to bed at 8.15pm on his birthday to watch darts – plan to make his mark as a co-commentator? Encouragingly, Owen pauses for thought before answering.

“I think the main thing I need to bring to the table is an insight into what’s happening out there,” he says. “Anyone can see if someone crosses a ball and scores a goal, anyone can see if it’s a good cross or a good finish, but why did it happen? What created it? What was the movement that enabled someone to get the space? I want to draw people’s attention to the fundamental things that happen to actually create these opportunities.

"I think that insight is what I’ve been brought on board to do, and articulate it in a certain way. And that’s something I’ve got to learn: to get straight to the point as opposed to using too many words, or using too much time, or whatever it might be.”

Good news, then, that Owen doesn't crave the ‘bantz’ of Robbie Savage. Indeed, he's serious about wanting to make a name for himself in this field – and makes it quite clear he won’t shy away from passing judgement on players.

“I’m not wary of upsetting people at all. I won’t go out to criticise people in general, but if someone has a bad game then I’ll say it is how it is. That’s the way it’s got to be really: you’ve got to be open and honest about anything, and I certainly haven’t got any qualms about saying someone’s had a bad game.”

Will he look to emulate a certain style in his new chosen career path?

“I think Andy Gray and Martin Tyler for many years were the voice of football. They’re probably the two people that are in my mind when I think about commentators.

“Obviously it’s an opportunity now for me and everyone else at BT to try and be those people going forward. There’s a huge opportunity for us moving forward, talking about games and calling games, and I’d love to be sat here in 10 years with people associating my voice with talking them through a game of football – and giving them insight on the game.” It's not just Stratford City that has a long-term development strategy.