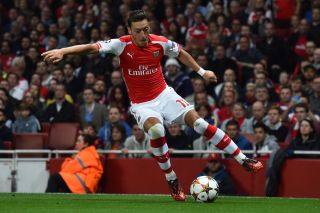 Arsene Wenger's side qualified for the competition for a 17th straight campaign with a 1-0 aggregate win over Besiktas on Wednesday.

Despite Arsenal failing to get past the round of 16 in the past four editions, Ozil feels they are capable of reaching the decider.

The Germany international, 25, said belief needed to be high, with Arsenal drawing Borussia Dortmund, Galatasaray and Anderlecht in Group D.

"We've strengthened our squad. We also want to show that we can play better in the Champions League," Ozil told The Telegraph.

"It's a difficult group, and we know Borussia Dortmund well, but we don't need to be scared of anyone. They know exactly how strong we are.

"We have the potential to reach the final. We should always believe everything is achievable.

"Not many people thought Atletico Madrid would get to the final. If you work hard anything is possible."

Ozil came in for criticism during Germany's successful World Cup campaign, during which he was deployed on the left.

The former Real Madrid man said he was happy to play anywhere for his team, but his preference is the number 10 role.

"I know what I can do and in the past few years I've shown that I belong to the select group of best players in the world as a number 10.

"What's important is that the manager gives me his trust and in Joachim Low and Arsene Wenger I have two managers who do exactly that.

"Both coaches know that my favourite position is the number 10. I've played on the left in a World Cup and for Arsenal but my best performances come as a 10."