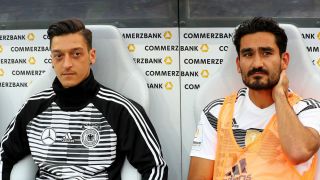 Jurgen Klopp has described criticism of Mesut Ozil and Ilkay Gundogan as "absolute nonsense" amid the ongoing fallout from Germany's World Cup failure.

The Premier League duo were jeered by their own fans in pre-tournament friendlies after meeting with controversial Turkish president Recep Tayyip Erdogan, which Gundogan explained was not a political statement.

Ozil, who has remained silent over the issue, has been urged by German Football Association (DFB) president Reinhard Grindel to publicly explain his actions, while national team general manager Oliver Bierhoff claimed the Arsenal star should have been omitted from the squad that suffered a shock group-stage exit in Russia.

But Liverpool manager Klopp has deemed the response an overreaction and hit out at suggestions the midfielders should be shunned from international football.

"The intelligent people of this country demand tolerance. And the others should shut up and not question the boys," Klopp told Sport Bild.

"Both were certainly not very well advised in this matter. Older, more experienced people should have helped them there.

"We should not forget that the two of them have Turkish roots even though they grew up here in Germany.

"But it is the same as always: the one who cries the loudest is the one who hears the most. But that's never been my thing."

Klopp was more upbeat over recent developments at former club Borussia Dortmund, where Lucien Favre has been installed as head coach.

The pair locked horns during Favre's previous Bundesliga stints and Klopp is pleased with the appointment of the man tasked with improving on last season's fourth-place finish.

"Lucien is a great professional and coach. What he radiates is calm, and that is probably exactly what Borussia needs right now," the ex-BVB boss said.

"A very good coach is back in the Bundesliga at a very good club and I will be very happy if it works."