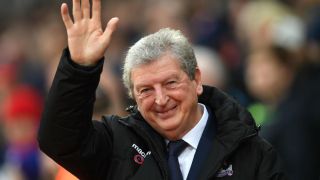 Roy Hodgson is refusing to get carried away by Crystal Palace scaling the lofty heights of 12th in the Premier League after their revival continued with a 1-0 win over Burnley at Selhurst Park.

Bakary Sako shone in a rampant attacking performance during the opening half hour, when he scored the decisive goal, before an injury-ravaged Palace defence repelled a robust Burnley response in the closing stages.

Defeat by the same scoreline at Turf Moor brought an end to Frank de Boer's brief Palace tenure and the subsequent hangover meant a rocky start to Hodgson's reign.

But the Eagles have only lost once in their past 12 league games under the veteran former England boss who, given the predicament he inherited, still only has eyes for steering clear of a relegation zone his side are now five points above.

"It changes quickly, doesn't it?" Hodgson told a post-match news conference. "I think you have to be very careful of those statistics and certainly I have no desire to start celebrating in the middle of January.

"The only thing that interests me, and I've said it right from the start, is where we are on the final day of May.

"The only thing that interests me is being one place about the relegation zone and anything else would be a huge bonus, especially after being four games and four defeats with no goals when I came.

"I soon added three games to that so it became seven games with no defeats and no goals. At that stage things were looking very, very bleak.

"It's nice now that it's not so bleak and we should enjoy that.

"But there's going to be lots more games like the one today where you think you do more than enough to merit the three points but you have to suffer during the second half."

RH: Bakary's come good for us and for himself lately. He's done very well recently for us and was in the team on merit. First half particularly he was very good.January 13, 2018

Sam Vokes and Ashley Barnes came closest to finding the equaliser for Burnley, one their manager Sean Dyche believed they merited.

"I don't change the record – the margins were tight early season when we were winning a lot of games and the margins are tight now," said Dyche after his seventh-placed team made it six Premier League games without a win.

"I still think we've moved a long way from where we were last season, particularly away from home because in the second half we've really taken that game on.

"Arguably we probably deserved to scratch something out of the game."