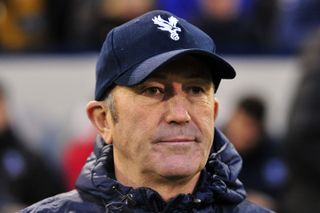 The defender, who recently returned to action after a five-month spell on the sidelines with ankle ligament damage, was carried off with an apparent neck injury at the end of the first half following a lengthy stoppage.

Palace do not yet know the exact nature of the problem, but manager Tony Pulis confirmed that the Norway international had been taken to hospital for further examination.

"He (Parr) has gone to hospital for a scan," Pulis said. "We need to look at the incident again, but it looks like the (Watford player) has caught him. It will be interesting to see it again on the cameras.

"We think the injury was caused by the impact. I'm not sure whether it is his jaw or his neck at the moment."

A late goal from James McClean condemned Palace to defeat in the fourth-round clash, the former Sunderland winger scoring his first goal for Wigan after Palace striker Aaron Wilbraham had cancelled out Ben Watson's opener.

Pulis was quick to voice his dismay at the result.

"We're disappointed not to get something out of the game," he added. "We came to have a go and tried to win the game.

"When you play in cup ties you need certain decisions to go your way. One or two decisions didn't go our way but that is what happens."