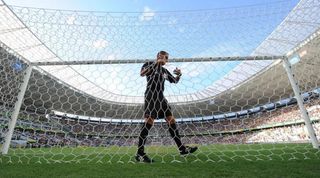 Pedro Sarabia's Libertad were 2-0 winners over strugglers 3 de Febrero at the Estadio Antonio Aranda on Saturday.

Gustavo Mencia and Rodrigo Lopez were both on target as Libertad won back-to-back games to move to 42 points from 18 games.

Libertad are now eight points clear with four rounds remaining after Guarani overturned a three-goal deficit to earn a 5-5 draw at Cerro Porteno on Friday.

Jorge Benitez put Guarani ahead inside the opening minute but it all went downhill from that point as Cerro Porteno scored four unanswered goals before the half-time break.

Julio Dos Santos, Oscar Romero, Guillermo Beltran and Rodolfo Gamarra found the back of the net for the home side.

However, Guarani emerged from the break with renewed belief and quickly reduced the deficit courtesy of Fernando Fernandez and Benitez, who scored within five minutes of the restart.

Fernandez scored again in the 66th minute as Guarani got themselves back on level terms, only for Gamarra to restore Cerro Porteno's lead two minutes later.

In other results, Rubio Nu scored four second-half goals as they routed General Diaz 4-0 at the Estadio Don Eduardo Acosta Caballero on Friday.

Olimpia, fourth in the standings, shared the spoils against cellar-dwellers 12 de Octubre in a 1-1 draw on Saturday.

Meanwhile, Deportivo Capiata and Sportivo Luqueno played out a 1-1 draw on Sunday.