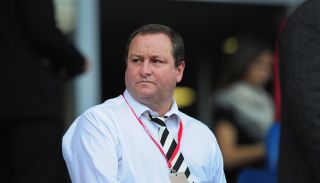 The man behind the Sports Direct retail business has polarised opinion among Newcastle fans with some of his decisions regarding managerial changes and transfer policy following his takeover of the club in 2007.

Pardew, though, believes Ashley, who has amassed a personal fortune of over £1.5billion, deserves credit for the financial commitment he has shown to Newcastle, even if he has made mistakes during his time as owner.

"Mike is a strong character who has been a success in his whole business life and is a genius in that world, but when you come to football the logic doesn't quite fit," Pardew told Sky Sports.

"He loves football but he sometimes can't understand how it works and it confuses and upsets him, and when he is upset he does things that aren't brilliant for the football club.

"That's just Mike and he has funded the club, made sure we have no debt - other than to himself - and supported me.

"But unless we get a billionaire from deepest Russia we are probably not going to be able to compete with the likes of Man United, Man City and Chelsea, which is what our fans want."