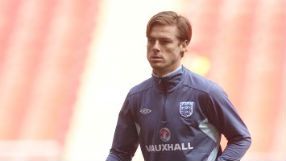 The 30-year-old put in a sterling performance in the middle of the park at the Millennium Stadium before going off with a shoulder injury in the second half, and the Hammers skipper admits he is in the form of his life.

“I feel like I am probably playing the best football of my career,” Parker said in The Sun. “I went into the game confident and in form and, hopefully, I showed that out there.

“I was really happy I got a start, got to play and finished up on a winning side.”

The Hammers skipper has endured a difficult last week, with the death of his father, Mick, occurring just eight days before England’s crucial Euro 2012 qualifier in Cardiff.

“It has been a tough week. I suppose the one disappointing fact was that my dad wasn’t here to see me play,” he added. “But I am sure he is looking down and is very proud.

“My father had been ill for a long time and I have been dealing with that in my own way and trying to stay strong in my own way.”

Since making his debut for England in November 2003, Parker has only gone on to amass four more caps for his country but the midfielder insists he has not been discouraged by his lack of opportunities.

“It hasn’t baffled me. In football, nothing baffles me,” he said.

“At times, it has been a bit disappointing for me. But, as always, I have just cracked on with it and seen what happened.”