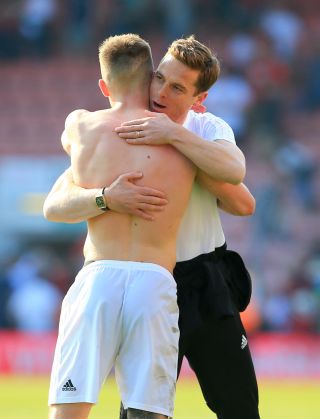 The relegated Cottagers followed up last weekend’s victory over Everton by winning 1-0 at Bournemouth to earn a first away success of the campaign.

Aleksandar Mitrovic’s second-half penalty secured victory at the Vitality Stadium after he was brought down in the box by Cherries substitute Jack Simpson.

Parker, who replaced the sacked Claudio Ranieri in late February, believes it is crucial to reconnect with disgruntled supporters ahead of their immediate return to the Sky Bet Championship.

“Really satisfying, back to back wins, another clean sheet as well. It’s been a good day really,” said Parker.

“Eight weeks ago I spoke about the fans, I spoke about how distant they’d become from the team really and one of my main aims was trying to bring the fans together, or certainly a lot closer to the team.

“OK it’s just something small in terms of how the season has gone for them but hopefully they’ve had a good couple of weekends.”

Mitrovic converted from the spot eight minutes into the second period to end a nine-match goal drought dating back to January.

The slender but deserved win was Fulham’s first on the road in the league since beating Millwall in the second tier on April 20 last year and the first time they have won successive league games all season.

“(It was) a fine performance after having to weather the storm a little bit against a very good Bournemouth side, certainly at home,” continued Parker.

“I thought as we got through that we put our mark on the game and then second half really controlled the game and played some lovely bits.”

Cherries boss Eddie Howe, who was taking charge of his 500th game in management, was at a loss to explain how his side lost their goal-scoring touch.

“Hugely (frustrating), especially after the back of last week where we were so good,” said Howe.

“We started the first half really, really well, thought it was going to be a really good day for us.

“We were sharp with the ball, created opportunities and I think that’s the thing we need to look at today, the amount of presentable opportunities we had.

“The fact we didn’t score after being so clinical last weekend is a difficult one to work out.”

Bournemouth’s preparation was disrupted after right-back Adam Smith withdrew injured in the warm-up and his replacement, Junior Stanislas, limped off after 23 minutes.

With a number of other defensive injuries, that left the hosts with a four-man backline comprising four centre-backs and Howe admitted his side suffered as a consequence.

“Naturally when you lose a player of Adam’s quality before the game that was difficult for the team but then doubly difficult to lose Junior as well,” he said.

“Upon that injury we’re then left with four centre-halves across our backline, so that was a difficult one for us to overcome.

“We never fully got our rhythm back in the match and we just hope the injuries aren’t serious.”

On the absence of on-loan Liverpool full-back Nathaniel Clyne, Howe added: “Nathaniel’s been carrying a hamstring injury for a couple of weeks now so he missed out today.”