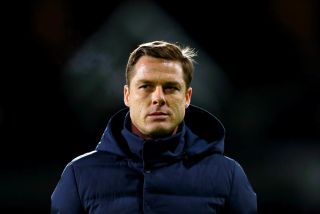 Manager Scott Parker highlighted the leadership qualities of Aleksandar Mitrovic after his goal gave Fulham a 1-0 win at Blackburn to heap the pressure on the top two.

Mitrovic became the first player this season to score 20 league goals with a smart turn and finish in the 65th minute which stretched Fulham’s recent record to six wins in the last nine.

Parker’s team are performing at both ends of the pitch – clinical finishing and a miserly defence that means they have yet to concede on the road in the league in 2020.

The Cottagers remain third, hot on the heels of the division’s top two, and Parker was proud of Mitrovic’s overall leadership on and off the pitch.

He said: “It’s a big return [20 goals] for so early in the season obviously and many games to come.

“What makes me most proud of Mitrovic is his overall performance. I talk about his performance before the game in the changing room, his whole demeanour and the way he was. His leadership qualities.

“But I think he epitomised everything that needed to be done today which is roll your sleeves up and first and foremost, win a battle and put in the hard work. He did that and he deserved his goal.

“It was always going to be a game of limited opportunities but when an opportunity came, we needed to take it. And it fell to Mitrovic, who put it in the net.

“We knew the challenge that was coming before kick-off and we stood up to that.”

Blackburn remain six points from the play-offs after the end of their 10-match unbeaten streak at Ewood Park.

But they’ve dropped two places and have won just two of their last nine league outings.

Boss Tony Mowbray labelled the decision to disallow a Darragh Lenihan goal for offside as “embarrassing” and felt his side deserved something for their endeavours.

He said: “We knew it was going to be a tough game against Fulham, who are a very good side. They’ve got some very special individual footballers.

“The nature of the game was frustrating. I thought we managed them really well. Mitrovic – I can’t remember him having a touch apart from scoring a goal. Maybe that’s what quality strikers do. I am disappointed to get nothing from it.

“Having watched Lenihan’s goal, it was two, maybe three yards onside. Obviously I’ve watched it back on the laptop. It’s not even close. It’s embarrassing.

“I don’t think Fulham deserved to win. We know they’re a good side but I thought it was a game of very few goalscoring chances. It was an attritional game. I thought we managed them really well.”