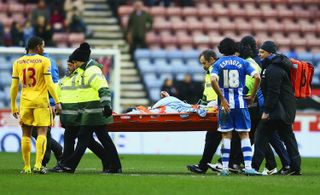 The Norwegian needed oxygen as he was carried off the pitch at the DW Stadium following an incident when he went down under a challenge from Callum McManaman during Wigan's 2-1 FA Cup fourth-round win.

It was initially feared that the 25-year-old had sustained a serious neck injury and he was taken to hospital for a scan, but Parr has been given the all-clear.

The full-back has revealed he could miss Tuesday's Premier League clash with Hull City, but he expects to be back in action before long.

He told Sky Sports: "I am extremely happy that I am 100 per cent well.

"It was a hard knock, but I am happy I have not suffered a serious injury. I hope to be back playing soon.

"I might not be able to play this Tuesday, but I am sure I will be ready next weekend."