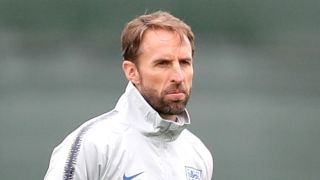 England have benefited from a lowering of expectations at the 2018 World Cup, according to manager Gareth Southgate.

With a positive outlook in the build-up to the Three Lions' last-16 clash with Colombia, Southgate said England's performances in the group stage have earned them a good reputation back home.

Victories over Tunisia and Panama ensured England's progress from Group G, and defeating Colombia would pit them against Sweden or Switzerland in a quarter-final on Saturday.

Southgate called for everyone connected to his team to enjoy the experience as the players aim to deliver a first World Cup quarter-final in 12 years.

The boss and have been taking a look around the Spartak Stadium. We'll see you tomorrow night... July 2, 2018

"For some reason, they like these lads," he said of the public mood around England. "I think that has gained us more support, plus the performances have been good.

"We have all been hurt by disappointment but maybe some of our expectations have been a little unrealistic.

"Whenever I have been to a tournament, not as a player, it has been a carnival and a festival of football and we have often overlooked that.

"We should all enjoy the journey."

The Three Lions have earned plaudits for their approach in Russia and Southgate has no plans to adjust England's tactics at Spartak Stadium.

"Sometimes you see cagey games at this point of the competition but we will continue to play in the style we have," said Southgate.

"We think we can cause opposing teams a lot of problems and that won't change because we are in the knockout phase.