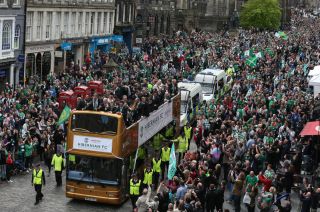 Paul McGinn watched in awe as an estimated 150,000 fans lined Edinburgh’s streets to salute his brother John and the rest of his Hibernian team-mates.

So the full-back jumped at the chance to follow in his younger brother’s footsteps and play for the club.

The 29-year-old has signed an 18-month contract after Hibs paid a fee to take him from St Mirren.

John McGinn remains a Hibs hero after helping end the club’s 114-year wait for the Scottish Cup in 2016 and securing a multi-million pound boost when he left for Aston Villa.

And the Scotland midfielder also helped cement his older brother’s affection for the club.

The former Dundee player told Hibs TV: “With John here, I came here quite a lot. I know how big a club it can be. I was there that day on Leith Walk with the bus and I see how big the club can be.

“It was a mad experience that day and John still talks about it all the time.

“It’s exciting for me and I hope to do anywhere near as well as him.

“He has been texting and phoning me asking if it had gone through. He still watches a lot of the games so it’s good he has a double reason to watch  now.”

McGinn has been reunited with Jack Ross 18 months after the Hibs head coach signed him for St Mirren.

“He signed me for St Mirren and then left,” McGinn said. “I think I got announced the same day he left.

“It didn’t take much (to persuade me). I’m a good age now and hopefully my best years are here.”

Ross added: “Paul’s someone I’ve known and rated for a long time, since I initially worked with him at Dumbarton.

“First and foremost, his attitude is first class. He’s an intelligent player who can operate in a number of positions and I’m convinced he’ll be a good addition to the squad here.”