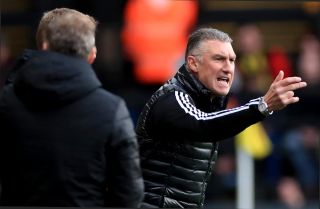 Nigel Pearson is happy to be labelled a firefighter as long as he can keep Watford’s Premier League flame alight.

Pearson was hired by Watford’s trigger-happy owners who dispensed of Javi Gracia and his replacement, Quique Sanchez Flores, following a poor start to the season.

The Hornets were as many as nine points adrift of safety, but, under Pearson have taken 10 points from four matches.

Only Liverpool and Manchester City have scored a greater tally than Watford since Pearson took charge last month.

Pearson, 56, kept Southampton in the Championship more than a decade ago before overseeing Leicester’s promotion to the Premier League and then leading the Foxes to seven wins from their last nine matches to retain their top-flight status back in 2015.

“We all get labelled with something,” said Pearson. “I would like to think that who I am as a man, and how I conduct myself that is not necessarily how I would be described.

“But if I have been labelled that [a firefighter] then fine. It doesn’t really bother me, it doesn’t bother me at all.

“I know the type of work I have done at a football club and I would consider myself to be somebody who builds things rather than goes in for a short-term fix.

“But having said that, it is really important that you are able to work in different ways.

“This is not a job that I come into with time to build. It is about trying to look at the short-term solutions to the situation we are in.”

Indeed, despite Watford’s run of three victories in their last four league matches, they head to Bournemouth on Sunday two points from safety.

The Cherries are on a miserable streak of eight defeats from their previous 10 outings and sit just one point and one place above Pearson’s side in the table.

“I am not going to say I don’t want that to happen,” said Pearson, when told his side will leapfrog Bournemouth with victory at the Vitality Stadium.

“Of course it would be a good thing, and we want to try and go and win the game, but there is still a significant part of the season left and we cannot get carried away with the weekly speculation. It is about sustaining the improvement we have made.

“We have to keep our focus on our performances and get our own house in order by securing enough wins. It is really that straightforward in my mind.”