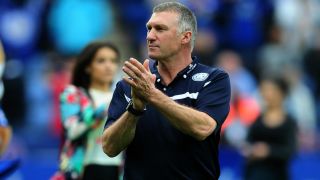 Pearson guided Leicester from League One to the top flight and masterminded a remarkable end to last season that dragged the club off the foot of the table to safety.

While Pearson – who was sacked in June for what the club said were "fundamental differences in perspective" behind the scenes – thinks he deserves some credit for building the platform for Leicester's 2015-16 success, the former Hull City boss has praised Ranieri for making subtle tweaks and resisting the urge to make wholesale changes for the sake of it.

"[I built that team] but I'm not there any longer. It's not really my place," Pearson told BBC Radio 5 live's Sportsweek.

"One thing that you've got to credit Ranieri for… it's very rare that you actually inherit a football club as a manager in a very positive position.

"He's taken over a team which is well along the path to being built – a team is never finished. But one of the hardest things to do when you inherit a side is get a group of players who technically fit what you're looking for.

"There are lots of facets to team-building. He inherited a side that is more than pretty good, they've proved themselves this year to be a very capable side.

"You have to give him some credit for recognising that and not doing too much with it."

Six months on from his departure from the King Power Stadium and with Leicester second in the Premier League, Pearson said: "I don't feel angry, it's important to move on.

"Leicester continue to do exceptionally well and I can take quite a bit of pride in terms of how things have been set up."

Leicester led the Premier League, but have hit a tricky patch in recent weeks, surrendering top spot to Arsenal and going three games without a win.

Nevertheless, Pearson is backing them to secure a Champions League spot.

He said: "I don't see any reason why they can't [finish in the top four] and the reason I say that is the first half of the season would suggest they are capable in terms of how they play and the quality that they have.

"Sustaining that is always going to be the problem over the entirety of the season but we've seen enough results this year to suggest that the sides who got promoted last year are doing relatively well. The big guns are not having it all their own way."