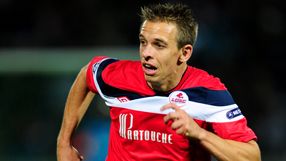 "We will have to be very smart and not give them too much space at the back because they are very fast," he added in a reference to Menez, Pastore and Nene. "The attacking three make the difference for them."

Lille, who have 62 points with five matches to go, are third in the table. PSG have 67, two points behind leaders Montpellier who visit seventh-placed Toulouse on Friday.

The top two sides qualify for the Champions League and the team in third go through to the play-off round.

"I think this will be a turning point in the season," PSG midfielder Mathieu Bodmer told a news conference.

"If we get the chance to win at Lille we must take it because we will leave them far behind us. It would also help us put Montpellier under pressure."

Lille could be without playmaker Eden Hazard who is doubtful with a calf injury.

The in-form Belgian, a target for several top European clubs, has scored seven goals and set up six more in the last seven league games.

"This is our last home match against a top rival," Pedretti said. "We have an opportunity to show them we are still in the title race and that we will fight until the end of the season."

Coach Rene Girard believes his Montpellier team can only benefit from the Lille-PSG showdown.

"I think this weekend is far more important for those two clubs," said Girard. "They have much more to lose than we do.

"One of them will lose ground, both of them if they draw. It could be very good for us."

Lyon take on third-tier Quevilly in the French Cup final on Saturday.

Olympique Marseille, who have slumped to 10th after failing to win any of their last 12 league games, travel to Lorient on Friday without injured midfielders Benoit Cheyrou and Alou Diarra.

Andre Ayew will also miss the rest of the season after having shoulder surgery on Tuesday.