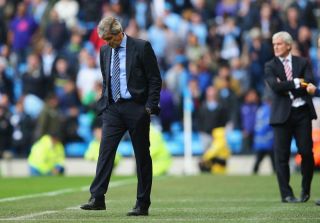 Stoke claimed a surprise 1-0 triumph at the Etihad Stadium thanks to a wonderful solo effort from Mame Biram Diouf, the Senegal international netting his first league goal since joining from Hannover.

City dominated possession for long periods but could not find a way through the Stoke defence, although they did have a big appeal for a penalty turned down by referee Lee Mason after Erik Pieters appeared to fell Yaya Toure in the box.

Chilean Pellegrini believes his side should have been awarded a spot-kick following that incident, however, the 60-year-old pinpointed City's failure to create chances as the primary reason for defeat.

"It doesn't matter, all of you know that it was a clear penalty but it doesn't matter. I don't want to analyse the game just in one play," Pellegrini said.

"We tried to create space, Stoke defended very well in the first half and in the second also.

"We couldn't create space but I think in the attitude we did all that we could do.

"We didn't play well in the creative way, it was too easy in the way they scored the goal in counter-attacking a corner in their own box, he [Diouf] ran 70 metres to score the goal."

Despite the loss, Pellegrini is refusing to panic and insists City will continue to play in the same free-flowing style that saw them emerge as Premier League champions last term.

"It's always serious to lose three points here at home, it's important for our team to try to win the nine points before the international break," he added.

"It's not good to start this international break with a defeat but this game always happens once a year, we [will be] working in the same way we are doing."