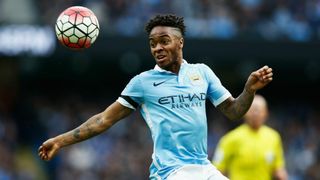 Manuel Pellegrini has challenged Raheem Sterling to show improvement in every game he plays for Manchester City.

The England international has already scored six times for the Premier League leaders but his manager stated before the draw with Aston Villa on November 8 that he wants to see a more clinical edge to Sterling's game.

The 20-year-old is set to face old club Liverpool on Saturday for the first time since his acrimonious £49million exit, and Pellegrini wants to see him improve his performance each week for City - starting against Jurgen Klopp's side.

"I always said from the beginning that Raheem is a very young player who must improve a lot. It's important he must demonstrate this in every game," he said on Friday.

"He's just 20 years old so he has a lot of years to work. I think he will be an important player, not just for City but for England, too."

Saturday's meeting at the Etihad Stadium will also see James Milner line up against his old club for the first time, with the 29-year-old having moved to Anfield on a free transfer prior to the start of the season.

Milner's move was motivated in part by a desire for guaranteed first-team football but Pellegrini insists City did everything they could to convince him to stay.

"I always think that it's special for every player to play against the team they worked for for a lot of years," he added.

"For James Milner it will be exactly the same - it's part of the career of a player.

"It was not difficult as we did all we could to convince James to stay but he wanted to go and have another challenge - we understand but we could not do any more to convince him."