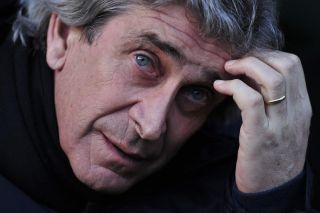 The diminutive Argentine's hamstring injury has coincided with a loss of form for Alvaro Negredo and Edin Dzeko.

That did not matter on Saturday as Yaya Toure struck the winner in a 1-0 victory over Stoke City.

However, with a final against Sunderland and the second leg of City's UEFA Champions League last 16 tie against Barcelona on the horizon, Aguero's return would be a welcome one.

Speaking after the Stoke win, Pellegrini said: "Sergio will start working with the whole squad on Tuesday and we will see during the week if he will be ready for the match (against Sunderland) on Sunday."

Even if Aguero is not fit, Pellegrini is confident the forward's misfiring colleagues will soon start finding the net again.

"It (attacking players going through scoring droughts) is normal," he said. "Strikers always lose their (ability) to score but I have trust in all of them. I am sure they will recover their normal performance."

Prior to Sunday, Pellegrini is set for a UEFA disciplinary hearing following his comments about referee Jonas Eriksson in the wake of City's 2-0 home defeat to Barcelona.

The Chilean will not attend the proceedings that are set to decide his fate.

"I am not worried about that," he added. "I will still be working here."