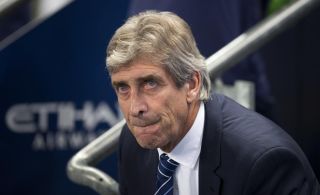 Premier League champions City are winless from their past three games in all competitions in just over a week.

City threw away a two-goal lead to draw 2-2 at CSKA Moscow in the UEFA Champions League and that was followed by back-to-back defeats against West Ham in the Premier League and Newcastle United in the League Cup.

The Manchester club also went on a four-game winless streak after consecutive wins to start the league campaign.

And Marsh, who made 118 appearances for City between 1972 and 1976 and won the Community Shield, believes Pellegrini could do well to see out the season.

"I think he will get the sack. There is every chance, if this carries on, that Pellegrini will be out, the same as [Roberto] Mancini was.

"Mancini won the Premier League and the following year finished second and he was sacked.

"If Pellegrini carries on like this, and Man City don't win the league or get to the final at least of the Champions League, which is looking dodgy as well, I think Pellegrini is sacked. He could go earlier.

"I think it is on a really fine balance now. People that are close to the club that I know are all saying that the owners have put in £175m and they are struggling.

"I think the owners are probably thinking if we get knocked out of the Champions League and if we end up third or fourth or fifth in the Premier League - which I don't think will happen - then I think Pellegrini is out early."

Marsh added: "Man City have got loads of world class players that, apart from David Silva and Sergio Aguero, are all playing ordinary football at the same time.

"When you have that, it doesn’t matter how brilliant the players are, if you are not pulling in the same direction you are going to struggle."