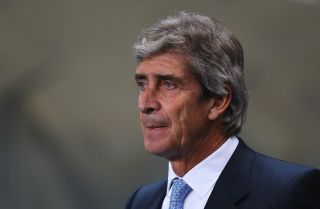 The City manager has overseen only one defeat at the Etihad Stadium this season, against Bayern Munich in the UEFA Champions League.

However, that impressive record came under threat against Championship Watford in the FA Cup fourth round, with the visitors moving two goals ahead on Saturday before a second-half resurgence from City secured a 4-2 victory.

Fernando Forestieri opened the scoring by calmly slotting under Costel Pantilimon before Troy Deeney added a second with a cool six-yard finish.

Watford buckled under a second-half onslaught, however, as Argentina international Sergio Aguero scored twice prior to a long-range strike from Aleksandar Kolarov.

Aguero grabbed his hat-trick with a back-post header in the third minute of injury time to complete the comeback, but Pellegrini expressed frustration at City's first-half performance.

"I was very worried at half-time because I talked with the players a lot before the match and said that, in the FA Cup, teams that play in a lower division have a lot of motivation," he said.

"If you don't play with 100 per cent intensity and desire you can lose and go out of the competition and we were jogging in the first half - if you play like that, you can't win.

"I didn't underestimate Watford; I didn't think it would be easy and I told the team this. The players must not believe they have an easy game but I feel that they had a very good reaction in the second half.

"We changed everything; we played with tempo, with pace. We continued playing in the same way we've played in this whole season at the Etihad. This reaction was very important.

"The whole team didn't do the things that we normally do in the first half, the most important thing for me is that Watford didn't score the third goal. If they'd have scored that, the game would have been finished."

Pellegrini did not want Aguero to play the entire 90 minutes, but felt it was necessary to keep the striker on the field.

The Chilean added: "Sergio is a top player - he's very important for us.