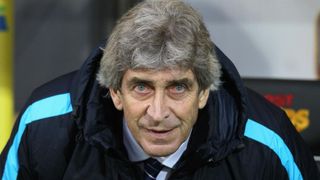 Manuel Pellegrini said Manchester City's 3-0 victory over Norwich City in the FA Cup shows his side have the strength in depth to challenge for four trophies.

City made seven changes for the third round tie at Carrow Road from their League Cup semi-final first leg defeat to Everton, but still included the likes of Raheem Sterling, Fabian Delph and Pablo Zabaleta.

First-half strikes from Sergio Aguero and Kelechi Iheanacho put City in control of the tie, before substitute Kevin De Bruyne sealed their progress with 12 minutes to play.

Pellegrini was delighted to see such a solid display from his much-changed side and believes it bodes well for the final months of the season.

"One of the merits of this squad is to be involved in so many competitions even with the injuries that we have to important players," he said.

"That's why when you have the option, as Kelechi had today, I think it's very important to demonstrate why they are in this squad. All the players are involved mentally and physically and they know that they are important if we want to continue playing in all competitions.

"It's very important to be focused game by game, we've played in the FA Cup and now we must return to the Premier League. We have to play two games at home and it's very important that we try to reduce the gap that we have with Arsenal.

"We have so many games to play in January that it is important to have the whole squad fit but for the moment, we chose this team, they played very well and now we must choose which is the best team to start against Everton."