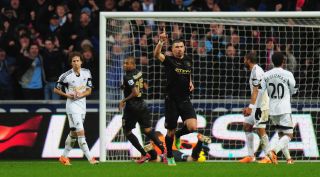 City won 3-2 at the Liberty Stadium on Wednesday with goals from Fernandinho, Yaya Toure and Aleksandar Kolarov giving them their third win in their last four away matches.

Early defeats at Cardiff City, Aston Villa, Chelsea and Sunderland had created concerns that Pellegrini's men were vulnerable away from the Etihad Stadium, but their form in recent weeks has allayed those doubts.

Fernandinho put City ahead on New Year's Day before Wilfried Bony equalised just before the break.

The visitors had to withstand pressure at the start of the second half, but further strikes from Toure and Kolarov sealed the victory, despite Bony's injury-time consolation.

And Pellegrini was happy with the display shown by his team, and believes they have put their early season problems on the road behind them.

"I am very pleased because we played against a very difficult team who play very good football, so to beat them here is very important for us," the Chilean said.

"At the beginning of season we dropped too many points away, it was not good for this team to win 11 (points) from 27, winning here is very important for us.

"I think the most important thing of the performance was to score the second and third goals.

"In the first half we were winning 1-0 (but) the offside goal grew them for the second half and we knew that it was going to be very difficult for us. I think the team has the character to change it."