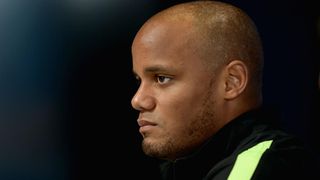 Manchester City manager Manuel Pellegrini has dismissed suggestions that captain Vincent Kompany will be sidelined for a further six weeks by his troublesome calf problem.

Kompany has been restricted to eight Premier League starts this season and his most recent attempt at a return to first-team action was curtailed by a recurrence of his injury nine minutes after coming off the bench during December's 4-1 victory against Sunderland.

The 29-year-old's injury saga has become a dominant theme of a season where City remain in contention for trophies on four fronts despite erratic form.

Reports this week suggested Kompany would not feature until March but, speaking ahead of Wednesday's League Cup semi-final second leg against Everton, Pellegrini had a more positive prognosis.

"I don't think Vincent will be out for six weeks – he will return in a couple of weeks," Pellegrini told a news conference.

"As I said in the last press conference, it's very important how he improves in the next weeks.

"Be sure we are doing all we can to review Vincent in different places with different doctors.

City are nursing a 2-1 deficit from the initial match at Goodison Park.

Pellegrini - who confirmed understudy goalkeeper Willy Caballero would once more start ahead of Joe Hart in domestic cup action - will again be without Wilfried Bony, Aleksandar Kolarov (both calf), Eliaquim Mangala and long-term victim Samir Nasri (both hamstring).

The Chilean lifted the 2014 League Cup ahead of his team's Premier League success later that season and he is hungry for more glory in the competition.

"Maybe Everton haven't been in a final for many years and they will be motivated but our team will do all they can to get there too," Pellegrini added.

"The most important thing is to try to play another final at Wembley. That is our target.

"After we lost to Everton 2-1 I said that if we don't qualify for the final, it's not because of that game but because we can’t win at home at least 1-0."