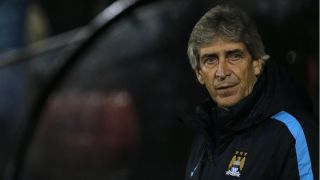 Manuel Pellegrini hailed Manchester City's character after Yaya Toure and Sergio Aguero inspired a late 2-1 comeback win at Watford – a game in which the manager believed his Premier League title-challengers could not afford to drop points.

City were without a league win on the road since September's last-gasp 1-0 victory at Crystal Palace and Aleksandar Kolarov's 55th-minute own goal looked set to be the source of further misery at Vicarage Road.

Third-place City are now three points behind leaders Arsenal and one shy of surprise package Leicester City, and Pellegrini suggested they might have left themselves with too much to do in an unpredictable title race without Toure and Aguero – stars of their 2011-12 and 2013-14 championship triumphs – belatedly coming to the party.

"This team has a lot of character," he told Sky Sports. "We never give up. We continued trying to score, always thinking we are able to score.

"We were losing 1-0 and had to take a risk. A draw was not good – we needed three points.

"It was a very close, tough game for both teams. Watford are in a good moment. But I think we deserved to win – more shots, shots on target and possession."

Aguero's goal was his first in the Premier League since November's 4-1 loss to Liverpool and the Argentina star has been hindered by hamstring, ankle and heel problems this term.

"Sergio Aguero's goal is very important," Pellegrini said. "I think he made a lot of better movement than the last games.

"We are not sending messages. It was important to end the six away games without a win. We want to go game by game."

Fernandinho turned in a typically tireless performance in the City midfield and he hailed Aguero's goal as "beautiful".

"We tried to score since the first minute and unfortunately they scored first in the second half," the Brazil midfielder told Sky Sports.

"I have a lot of confidence in my team. We kept playing, we kept fighting to the end and Kun [Aguero] scored a beautiful goal at the end.

"We win after so many matches away without a win. Football is like that."