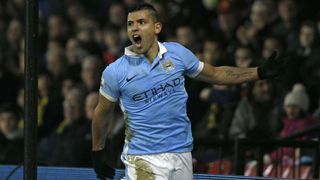 Sergio Aguero is fit enough to play a third match in eight days when Manchester City visit Everton in the first leg of their League Cup semi-final on Wednesday, according to Manuel Pellegrini.

Argentine striker Aguero is yet to complete 90 minutes since returning from a heel injury that had kept him out for three weeks and he has struggled for form during the festive run of fixtures.

However, with a calf problem likely to see Wilfried Bony join Vincent Kompany and Samir Nasri on the sidelines for the trip to Goodison Park, the manager believes Aguero - who scored an 84th-minute winner against Watford on Saturday - is in good enough shape to feature from the start again.

"Bony has a kick in his calf so maybe he's not fit for tomorrow. In a few days more he should be fine to come back," Pellegrini said.

"Sergio played three games in a week which was no problem for this moment. The last injury was not a muscle injury, just a pain in his heel.

"He's fit and the best way for him to recover his best performance is to play games."

Everton have conceded 29 goals in the Premier League so far this season but Pellegrini is not expecting that record to offer his team a simple passage to the final at Wembley Stadium next month.

"We won't change our style. We will play as an offensive team, to create chances and to score the most amount of goals.

"We don't think it will be easy because Everton have conceded goals recently.

"It's important when you're in a competition to try to win it. We've won three games and now we're in the semi-final.

"It's very beautiful to finish at Wembley in front of a lot of people."