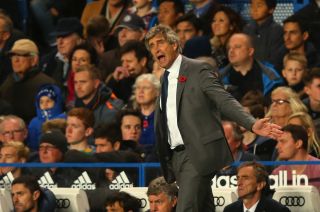 City appeared the most likely winners of the Stamford Bridge clash between the two Premier League title favourites after a stunning Sergio Aguero strike - his sixth in four games and 10th of the season - cancelled out Andre Schurrle’s first-half opener.

But as in the 3-2 losses at Cardiff City and Aston Villa, a defensive error proved costly for Pellegrini's men as Fernando Torres grabbed a last-gasp winner.

Joe Hart's role in the previous two reverses was questioned, along with a sub-standard display in the 3-0 UEFA Champions League loss to Bayern Munich, and the England goalkeeper was once again culpable as he charged out of his area past a back-header from Matija Nastasic to leave Torres with a tap-in.

"I don't know if it's the worst (way to lose) but one of the worst, I think so," Pellegrini told Sky Sports after his team dropped to seventh in the table.

"We played very well, especially in the second half. We were absolutely in control of the ball and the game.

"It's exactly what happened in the other defeats that we’ve had this year away – we have an important mistake to lose the game."

The former Real Madrid and Malaga coach refused to apportion blame to Hart or Nastasic after the game.

"I don’t think it is the moment to say who has to take the ball," he explained. "They scored the goal and we will see in the week what happened when we analyse."

"I think that we played a very good game. I think that in the first half, maybe Chelsea had one chance and they scored and they also shot and hit the crossbar (through Torres).

"But in the second half we draw (level) immediately and had three or four chances very clear to score.

"Maybe a draw was going to happen in the game but these games you must win. We scored and they scored two goals."