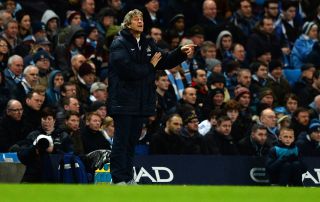 Strike duo Edin Dzeko and Alvaro Negredo both secured braces with substitute Sergio Aguero also finding the back of the net to complete a successful return from injury.

Pelligrini was delighted with his team's ruthlessness in front of goal, particularly with Blackburn putting in an impressive shift.

"They were a very strong team and we didn't find space in the first-half.

"It's very important that Alvaro scored that goal at the end of the first-half when he did.

"Yes, we had lots of chances in the second half but congratulations to Blackburn, they played a very good game tonight."

The Chilean tactician was delighted with his side reaching 99 goals in all competitions and believes his vision and preferred playing style is becoming entrenched in the squad.

"When I arrived here I knew it was important to win a trophy but I think the way this team plays is equally important," Pellegrini said.

"As I said after the game against West Ham, it's pleasing to not give any goals away, as well - we're a very balanced team at the moment.

"It's important to play in the same style, we try to play independent of the score at any one point – to keep improving in every moment of the game.

"I know it's more easy to sit back and counter attack for two thirds of the game but it's not my philosophy and I don't think that it's the philosophy the club wants.

"We want to always be an attractive team."