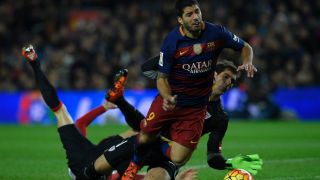 Barcelona president Josep Maria Bartomeu has called for the penalty and expulsion rule to be removed from football because it ruins the spectacle.

Athletic Bilbao goalkeeper Gorka Iraizoz was sent off just four minutes into the club's clash with Barcelona after bringing down Luis Suarez in the box.

Lionel Messi dispatched the resulting penalty, and Athletic suffered a 6-0 loss at the Camp Nou due to having to play with ten men for over 85 minutes.

Bartomeu believes the penalty and expulsion rule is "excessive" and needs to be looked at.

"The rule of a penalty and red card should be changed for the good of the spectacle of a football game," he told Movistar+.

"It's an excessive double punishment.

"It's evident that this action has marked the game today. To play a man less for 87 minutes is very complicated."