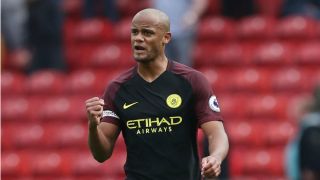 Guardiola arrived in Manchester to great fanfare but a trophyless first season in charge has seen criticism levelled at the Spaniard from some quarters.

But Kompany is confident Guardiola will ultimately live up to expectation in the long run.

"Pep's tactical and technical assessments are like nothing I've ever seen before and I think that's why people enjoy to see him fail," Kompany told Sky Sports.

"It's normal, someone that's been successful that many times, you have one season where it's not going your way and people want to focus on it - that's what creates news and creates entertainment.

"But in reality I can vouch for him in the sense that I've been around a lot of top people in football and all of them had qualities, but he's really special.

"It's not come off this season but there's no doubt in my mind that, with the right amount of time and a season where things go a bit more our way, he's capable of delivering extremely good things."

"The league is the truth but we're on the right track," added Kompany. "I've never been involved in a team that presses like we do today, that keeps possession like we do today. If the key moments improve, then we're not far off.

"There's no greater pleasure than to have possession of the ball and to be able to control a game which we do really well, so I have seen progress.