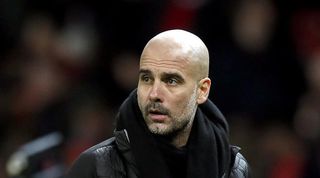 Pep Guardiola fears he could be dismisses as Manchester City manager if his side are knocked out of the Champions League next month.

City have been drawn against Real Madrid in the last 16 of Europe's leading competition, with the first leg scheduled to take place at the Santiago Bernabeu on February 26.

City have never reached a Champions League final and have not even reached the last four during Guardiola's time in charge.

The reigning Premier League champions are currently 22 points adrift of leaders Liverpool, and now look set to turn their attention towards Europe.

But Guardiola says it will not be easy to triumph given City's lack of historic Champions League experience.

“That’s why it is so difficult to win it. And in 100 and more seasons of history for Manchester City, it was 100 seasons of failure – that is not true,” he told Football Daily.

“There are many incredible players that made our fans happy, and [times when] our fans enjoyed part of the season. I know the people say ‘You are good’ or ‘You’re not good enough.’

“I accept it. I want to win the Champions League, I dream and will enjoy the games against Real Madrid, to see what I can do.

“And this process, the two weeks before, will be the happiest moments of my profession, to imagine what we can do to beat them.

“If we don’t beat them, then the chairman will come, or the sporting director, and say ‘It’s not good enough, we want the Champions League, I’m going to sack you’. Then ‘OK, thank you, it was a pleasure.’

“I don’t know, many times it has happened," he added when pressed if he really thought he could be sacked if City lose to Madrid. "Or maybe he will say ‘OK you’ve done well, but what can we improve?’

“Since I arrived, that is what I have got from this club – what can we do, then do it better and do it better. That is the process.

“Liverpool have spent four or five years to win the first title last season. It was a process – new players, the process, then invest more and more, and they are the best team in the world right now.

“Sometimes it’s not possible. Sometimes there are opponents, sometimes you cannot do it because in no sport does one team win all the titles all the time. It’s impossible.

“We give a bad, bad message for the new generation, to our kids, to just count the winner, the trophies.

“You said the season would be a disaster, but if we win the Champions League it would be sensational. Why?"