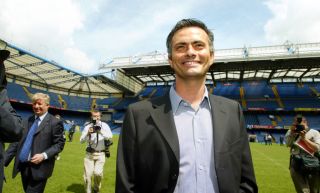 Jose Mourinho is in search of his third Champions League trophy with a third club. The new issue of FourFourTwo magazine examines the Tottenham manager's history with Europe's elite competition – but here, we take a look through his whole managerial career...

Mourinho takes his first senior job, promoted from assistant manager after Jupp Heynckes' dismissal. He first falls out with the board after refusing to hire their assistant manager pick, calling him “a donkey who worked for 30 years and never became a horse.” After a positive start, Mourinho asks for a contract extension and resigns when it’s refused.

Mourinho agrees a deal to become Uniao de Leiria head coach and takes the minnows to third by January. Their shock success prompts a struggling Porto to hire him mid-season. He takes them from fifth to third and promises to win the Primeira Liga next year.

With a team built around the likes of Ricardo Carvalho, Deco and Helder Postiga, Porto storm the league, finishing 11 points ahead of Benfica. Their 86 points becomes the highest Portuguese points tally in the 3-points-per-win era. They win the cup and beat Celtic in the UEFA Cup final to complete a famous treble.

Last season’s heroics are unthinkably surpassed by Jose’s first Champions League trophy, with the most memorable win coming in the quarter-final against Sir Alex Ferguson’s Manchester United. The image of Mourinho sprinting the length of the field after Porto’s late winner becomes the defining picture of Porto’s European fairytale.

Mourinho agrees to replace Claudio Ranieri at cash-rich Chelsea. He instantly makes waves, calling himself “a special one” in his first press conference, a nickname that would persist throughout his career. His Chelsea side wins the title with 95 points, only conceding 15 goals, both Premier League records. He’s denied back-to-back Champions Leagues by  Liverpool’s Luis Garcia’s “ghost goal” in the semi-final.

Mourinho wins back-to-back Premier Leagues, finishing on 91 points, but is unable to challenge on other fronts, getting knocked out by Barcelona in the Champions League. Upon the Premier League trophy presentation, he bizarrely throws his blazer, medal and replacement medal into the crowd

Andriy Shevchenko is the big-name signing over the summer, but tensions grow between Mourinho and Abramovic when Shevchenko doesn’t perform and Mourinho prefers Didier Drogba. For the first time in his career, he doesn’t finish as league champion, finishing second to Manchester United, but he wins both domestic cups.

Mourinho sensationally leaves Chelsea a month into the season after mounting tensions between him and Abramovic, heightened by Avram Grant’s appointment as sporting director. Grant takes Mourinho’s job and leads Chelsea to their first-ever Champions League final.

Mourinho takes the Inter Milan job and speaks fluent Italian in his first press conference despite saying he’d only been learning it for three weeks. He instantly clashes with his rivals managers, famously claiming they’d win “no titles,” but mispronouncing it. The phrase caught on so much it was used on Inter celebratory t-shirts after winning the Scudetto by 10 points.

Mourinho builds one of his most iconic sides by bringing in the likes of Wesley Sneijder, Samuel Eto’o and Diego Milito. They retain the Scudetto and beat Roma in the Coppa Italia final, before defeating Bayern Munich to become the first-ever Italian side to win the treble. Their win over Barcelona in the semis, which denied them a final at the Bernabeu, is described as Mourinho’s successful Real Madrid job interview.

Mourinho is appointed Real Madrid boss and is touted as a managerial galactico, brought in with the intention of winning their elusive tenth Champions League, or “La Decima.” Madrid miss out on the title to Pep Guardiola’s Barcelona, who also beat them in a fiercely tempered Champions League semi-final. However, they win the Copa del Rey, their first trophy since 2008.

Madrid’s wait for La Decima goes on after they’re knocked out of the Champions League semi-finals for the second year running, losing on penalties to Bayern Munich. They enjoy a glittering league campaign - their 100 points the most in any of the top European leagues at the time and their 121 goals the most in La Liga history.

Things begin to unravel as tensions rise between Mourinho, Iker Casillas and Sergio Ramos. As the season goes on, his departure appears inevitable. He also grows more erratic in his criticism of Barcelona and their apparent preferential treatment from referees - during one El Clasico, he pokes Barca assistant Tito Vilanova in the eye.

Mourinho makes a long-awaited return to Chelsea, and immediately makes headlines by dropping then selling Juan Mata. He is particularly animated in press conferences, lambasting West Ham for playing “19th-century football”, calling Arsene Wenger “a specialist in failure,” and describing Chelsea as a “little horse” in an open title race in which they’d ultimately finish behind Manchester City and Liverpool.

After recruiting Diego Costa and Cesc Fabregas from Spain, Chelsea cruise to a third title under Mourinho’s guidance. They also win the League Cup but are shocked at home to Bradford City in the FA Cup.

The start of the season is marred by a public spat with team physio Eva Carneiro, which led to her launching a lawsuit against the club. They then endure a disastrous first half of the season, losing nine of their first 16 Premier League games, leading to Mourinho’s sacking with Chelsea only a point above the relegation zone.

Mourinho replaces Louis van Gaal as Manchester United manager and signs Paul Pogba for £89 million, a world-record fee at the time. United’s poor league form is masked by their success in the cups, beating Southampton in the League Cup final and Ajax in the Europa League final, the latter gaining them Champions League qualification.

United start the season strongly but cannot keep up with their local rivals Manchester City, who are storming the league under old rival Pep Guardiola. Manchester United secure their highest finish since Alex Ferguson’s retirement but are dumped out of the Champions League by a home loss to Sevilla, after which Mourinho embarks on a 12-minute rant defending himself. United lose the FA Cup final 1-0 to Mourinho's old side Chelsea.

Many predict United will have a ‘third season slump,’ replicating Mourinho’s struggles in his thirds seasons at Chelsea and Real Madrid. They are proven correct as United flop in the Premier League, winning only seven of their first 17 games. Mourinho produces another memorable rant after losing to Tottenham Hotspur, holding three fingers to the cameras to indicate his Premier Leagues triumphs and shouting “Respect!” He’s sacked after losing to Liverpool.

After nearly a year out of management, Mourinho is announced as Tottenham Hotspur, hours after Mauricio Pochettino’s surprise sacking – which took place only months after leading Spurs to the Champions League final.