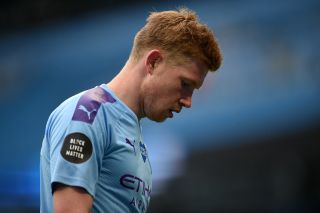 De Bruyne will miss the Premier League visit of Arsenal this weekend after he returned from Belgium duty with an unspecified knock, which also seems set to rule him out of City’s Champions League opener against Porto next week.

Guardiola was reluctant to put a timeframe on De Bruyne’s recovery but revealed the playmaker having just eight days’ rest in-between top-flight campaigns allied to a lack of pre-season were likely contributors to his injury.

The coronavirus pandemic continues to cause a fixture pile-up, with City in action five times before the end of this month, and Guardiola has warned “we’ll rubbish this incredible sport” if quantity is prioritised over quality.

“Kevin said he had eight days after last season which was incredibly demanding,” Guardiola said. “No pre-season, eight days off, eight days holidays, he was with his family with his newborn, he has to be at home.

“He cannot go on holiday, rest, he trained here and played really good as always but at the end the boy has a limit and he gets injured.

“It’s too much. Hopefully we go with the new ideas the Premier League has, they will point to quality and not quantity – if not we’ll rubbish this incredible sport.”

De Bruyne’s injury is not thought to be serious and Guardiola attaches no blame to Belgium for the 29-year-old coming back to the north-west nursing an injury.

“I never complain about international games,” Guardiola said. “I know how important it is for the players to play for their countries, it’s a privilege and they have to do it.”

Gabriel Jesus will also be absent for the Saturday teatime fixture with no chances being taken on his injury but Guardiola offered a more upbeat assessment about the Brazilian’s fellow striker Sergio Aguero.

City’s record goal-scorer has recently returned to training following a knee operation in June that saw him miss key fixtures at the end of last season and the Argentinian could be included in the matchday squad to face Arsenal.

“He’s trained well and we are happy, we need a striker, we played without them but he’s trained three or four days, we are happy to see him back on the pitch after a long time,” Guardiola said.

City have won only once in three league matches so far and to sit 14th in the embryonic standings but they could also have Raheem Sterling available to face Arsenal after the forward withdrew from England’s squad due to injury.

“He trained much better in the last few days, the days we came back there was still some niggles but the last two or three days he feels better,” Guardiola said.

Arsenal’s trip to the Etihad Stadium on Saturday brings Guardiola into the spotlight alongside Mikel Arteta, who was assistant to his fellow Spaniard at City before taking the reins at the Gunners last December.

Guardiola says it is no shock to him that Arteta has provided a sense of stability at Arsenal, leading them to FA Cup glory last season, defeating his former club and old boss en route to lifting the trophy.

“Maybe we should clarify who’s the master and who’s the apprentice first,” Guardiola said. “All the people who know him, we didn’t have any doubts about what he’s doing in a short period of time.

“He settled really well and the way his team is playing right now is perfect for the quality they have. He was able to get Arsenal back to the position where they were a long time ago.

“He’s doing really well in all competitions. Mikel is a competitor and a fighter. All the people who love him, we are more than happy with what he’s doing in London.”