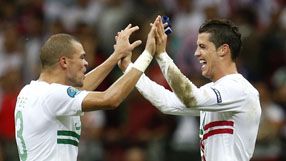 The influential Real Madrid pair returned to light training on Wednesday after sustaining injuries during Sunday's 2-2 'Clasico' draw at Barcelona.

"The match against Barcelona was very tiring," Pepe told reporters at Portugal's training camp in Obidos, just north of Lisbon. "Cristiano has more chance than me to be fit for Friday's match."

Ronaldo travelled to Portugal after Real said his injury was not serious. He hurt his left shoulder in the second half against Barcelona and, although he appeared in some discomfort, finished the match.

Fiery Brazilian-born Pepe said he still hoped to take part in the Russia clash, which features the two group favourites who are setting the pace with two wins from two matches.

"I am going to do everything within my power to recover in time. I want to help the team and am recovering well," Pepe said.