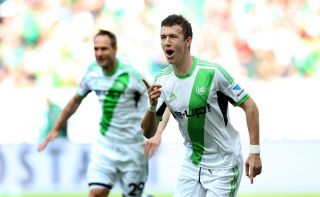 Perisic put the UEFA Champions League hopefuls ahead twice, but they gave up both leads to miss a chance to move above Bayer Leverkusen and into fourth.

The Croatian said his team's failure to work hard defensive was costly at the Volkswagen Arena.

"It was a perfect start today, scoring the opener after just three minutes, and we then had a few chances to add to that lead," Perisic said.

"Freiburg's keeper made some good saves, then they equalised.

"We were still playing well though and we got back in front again. After that we needed to stay focused for the final 15 minutes, but today we weren't so good when it came to tracking back."

Admir Mehmedi levelled just after the hour-mark for the visitors when he cut inside the from the left before beating goalkeeper Max Grun at his near post.

Perisic tapped in a Christian Trasch cross nine minutes later, only for Freiburg to equalise to take a point thanks to Marco Terrazzino.

"I think we had the game well under control but we conceded two silly goals, that should never have happened," he said.

"We still had plenty of chances to sew up the game though and as far as we're concerned, it's two points lost today."

"We didn't start well at all, but on the back of our second-half performance we were good value for a point in the end," he said.